I’ve been doing a lot of Windows Autopilot testing lately and honestly, the biggest pain in doing so is creating VMs to test with. So, I created a PowerShell script that does all that work for me in creating as many VMs as I feel the need for. I thought it was handy enough to share so I put it on the PowerShell Gallery for others to download and use (at your own risk, no warranties, etc. etc. etc.).

While this script was created to help automate the creation of Hyper-V VMs for Windows Autopilot testing, but it can be used to create Hyper-V VMs for any purpose you need.

Run the script with administrative privileges on your Hyper-V host machine.

Here’s what it does

When the script is run, it will prompt you for the various VM settings necessary to create a Hyper-V VM. It will then create, and start, as many VMs as you ask for using the provided naming prefix to begin the VM name. If you do not change the default values at the top of the script, it will create and start a VM named Autopilot-*999*, where *999* is a three digit random number, with 2GB of RAM and the VM config files and hard disks stored in the Hyper-V default locations. 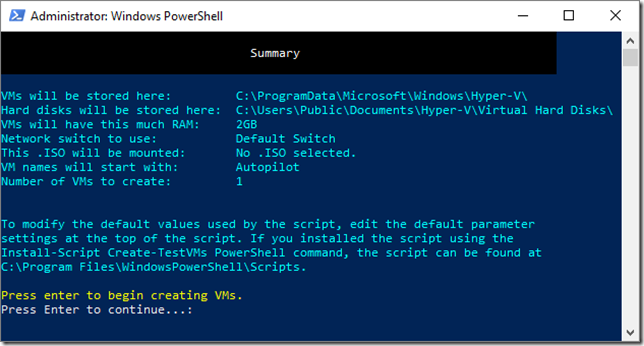 If you do not modify the defaults when prompted when the script runs, the following default values will be used:

If you do not modify the defaults when prompted when the script runs, the following default values will be used:

You can accept or modify the default values when prompted as the script runs.

To modify the default values used by the script, edit the default parameter settings at the top of the script. If you installed the script using the Install-Script Create-TestVMs PowerShell command, the script can be found at $env:ProgramFiles\WindowsPowerShell\Scripts.

Feedback or suggestions for improvements? Find me on Twitter @jeffgilb.